Rosicrucians have long held up in Sir Francis Bacon as one of their historical leaders. Many Rosicrucians have also explored the idea that Bacon promoted the ideas of the enlightenment to the world as the secret author of the works of William Shakespeare. The notion that Bacon was behind Shakespeare’s writing is strongly supported by modern cipher sleuthing, including my own.

This topic has been one of my longtime hobbies. I’ve written about it extensively on internet forums as well as my own Shakespeare Authorship blog. Much of what I’ve written on the cryptographic evidence is based on my own original research.

I am also a long time Rosicrucian and member of Enneadic Star Pronaos.

This is a topic of interest to AMORC since its beginning. Our first Imperator, Dr. Harvey Spencer Lewis, mentioned that he had been the Vice President of the Francis Bacon Society of England for several years. He collected a number of books on the theory of Bacon’s authorship of Shakespearean works. It’s not unusual to find various articles going back many decades in Rosicrucian publications on Shakespeare and Bacon. Nor is it a surprise that the major AMORC Lodge in London to be called Francis Bacon Lodge.

The Internet Encyclopedia of Philosophy describes Bacon as “Sir Francis Bacon (later Lord Verulam and the Viscount St. Albans) was an English lawyer, statesman, essayist, historian, intellectual reformer, philosopher, and champion of modern science.” There is voluminous evidence supporting the “Baconian theory of Authorship” that goes back to the earliest Shakespeare publications. A brief listing of some of the arguments supporting the theory can be found HERE.

There is a multitude of motivations he could have had for writing these great literary works in secret. At that time it was unseemly for a prominent educated gentleman to write plays for the coarse public. And as was written then “Poets were ever thought unfit for state (office),” and his various positions in the government necessitated him being seen as something much more severe than a poet. Also, he believed, per this quote of his that, “Writings should be such as should make men in love with the lesson, and not with the teacher.”

Bacon, who was an expert in government intelligence, spycraft and ciphers wrote: “Let him do his private business under a mask.” In his essay On Negotiating he wrote:  “In choice of instruments, it is better to choose men of a plainer sort.. .”

Taking a step back we should wonder why the literary works of Shakespeare, whoever he may have been, should be of any interest to modern Rosicrucians. My thoughts on this, being a lover of good literature, especially that of the classics, is that the very best literature comes from some of the greatest minds produced by human society. And what makes their writings so great is how profoundly they show us our nature.

Some quotes I’ve come across are “Shakespeare’s ability to summarize the range of human emotions in simple yet profoundly eloquent verse is perhaps the greatest reason for his enduring popularity” and “William Shakespeare was the most remarkable storyteller that the world has ever known.” Another wrote “Indeed, as you learn to read Shakespeare, you are learning to read the world. As you interpret Shakespeare’s characters, you are practicing figuring out life’s characters. Struggling with the complexities involved in interpreting Shakespeare is a superb preparation for struggling with the complexities of life…Shakespeare shows how the head and the heart need each other… when you understand what you feel, and you hear with an understanding heart, [that] is the mark of an educated person.”

Perhaps of more interest to us as Rosicrucians is the suggestion by H. Spencer Lewis and other writers that Bacon was also an Imperator of the Rosicrucians in his own time. Perhaps this connection was first made when early Rosicrucians noted the Rosicrucian thought that seems to be present in Bacon’s unfinished work The New Atlantis.

I recommend the book Bacon, Shakespeare, and the Rosicrucians for further reading on the topic.

Part of my search has been for evidence involving secret codes in the Shakespeare works that would indicate Bacon’s authorship. In this case, I’m using the term ‘cipher’ loosely to imply any hidden or disguised writing or messages. In the Shakespeare works this primarily comes down to disguised renderings of Francis Bacon’s name in a variety of ways that collectively looks quite suspicious and impossible as something accidental.

The topic of ciphers themselves has a long history. An excellent work on ciphers was recently done by one of our Pronaos members, Chris Kunferman, and published in AMORC’s peer-reviewed metaphysical journal, the Rose-Croix Journal. In the article Kunferman explains the technique he has used to decipher and interpret one of the mysterious documents in the world, the 15th-century Voynich Manuscript.  For hundreds of years, the manuscript has been unreadable, written in a code or a language that is currently unknown or undecipherable to any who have so far tried to read it. Kunferman advanced a theory that the writing in the book is a known language but written backward and upside down, perhaps projected on the page from a camera obscura. This might have been done to hide the content of the book, which judging by its illustrations is about herbology and astrology.

It should be noted that this same issue of the Rose-Croix Journal also has an article about how the author of Shakespeare’s Twelfth Night used the play to promote religious tolerance using the veil of popular stage comedy.

The possibility of ciphers in Shakespeare’s works has been recognized by experts such as William and Elizabeth Friedman. They said that if there were such cryptic messages in Shakespeare, they would most likely be in a form that indicates the real name of the author, in this case, that would be Francis Bacon or some close variant. One professional cipher expert for the British government, Alan Stripp, has examined this subject and concluded that there is good evidence of such ciphers. And a longtime member of the American Cryptogram Association has discussed what he sees as a reference to a cipher idea in the Shakespeare sonnet 136.

This sonnet has the line “among a number one is reckon’d none” and is recognized as referring to “the cabalistic Rule of Colei” which states that “one unit can be added to, or subtracted from, the gematria value of a word without affecting its value. 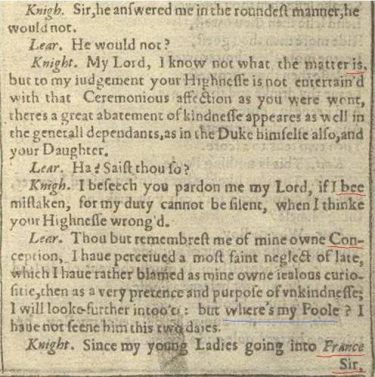 One of the most interesting possible ciphers in the works is this one, found on page 287 of the play of King Lear:

Here, it does not take much close examination to see the scrambled syllables of Sir-France-is-bee-Con (Sir Francis Bacon). Acrostics, as well as homophone words and syllables, are perfectly acceptable as cipher clues. In fact, if the cipher were too easily recognized, then it wouldn’t be a cipher at all since they are meant to be disguised and discovered only by the discerning. What is more interesting is that in this cipher candidate each of the four long lines has a letter count of 33 if you exclude the letters of the cipher syllables (France is bee con). And the number 33 is very closely connected to the man ‘Sir Francis Bacon’ because his last name has a numerical value of 33 in which B=2, A=1, C=3, O=14, and N=13.  Several other discovered ciphers in the same works are also connected to the number 33. Further, the page number of 287 for the above example is also connected to both Francis Bacon and the Rosicrucians. The number stands out in many places in the Shakespeare works. And there is even a contemporary reference in another book connecting this number to an unidentified individual called “Francis Rosicrosse” who was associated with the Rosicrucian fraternity. The mystery deepens, as we say.

Here’s another example of a similar cipher candidate:

Here the first word ‘three’ can also stand in for and represent the letter ‘C’ to produce the sequence B A C O N. This is connected with the two ‘three’s’ in the middle line to suggest ’33’.

Now, a skeptic might say that these are just coincidences. However, both cipher and legal experts on evidence state that a few coincidences may be just that. But as the supposed coincidences continue to multiply then the likelihood that they are merely coincidences drops. And so far I’ve collected nearly 60 such examples of ciphered references to Bacon in Shakespeare works. This would likely exceed any rational boundaries of coincidence.

One might ask then – What is the state of scholarship on this evidence? The answer is that there isn’t any. Surprising as it may seem but in academia generally and also in research and scholarship there is not often emphasized in the search for truth. It’s often primarily an arena for promoting one’s personal research agenda and seeking professional advancement and security. It can be professionally risky even to show an interest in what many see as a radical idea.

In Shakespeare studies, there are a handful of scholars interested in researching questions around the authorship of the Shakespeare works, but those at the top of the field have made the topic a taboo, at least as far as looking beyond the recognized playwrights of Shakespeare’s era. This is why more open-minded enthusiasts, including many, many other scholars, teachers, and notable intellectuals have signed a Declaration of Reasonable Doubt to promote open inquiry by the academic establishment. If you wish, you can add your name to the list. It has over 4200 signers already.

In any case, readers can at least enjoy the thoughtful possibility that one of greatest minds in literature was perhaps, a leader of an esoteric group, Rosicrucian in nature, who promoted the advancement and greater enlightenment of the human consciousness, the welfare of humanity and the world we inhabit, and as well our spirituality.

2 thoughts on “Rosicrucians, Ciphers and Francis Bacon the real author of Shakespeare’s Works?”

This is the member blog for the Enneadic Star Pronaos. We’re the local Rosicrucian group for AMORC members in Oregon and SW Washington.  During the COVID-19 pandemic we are not meeting in person for rituals but are holding monthly online meetings.