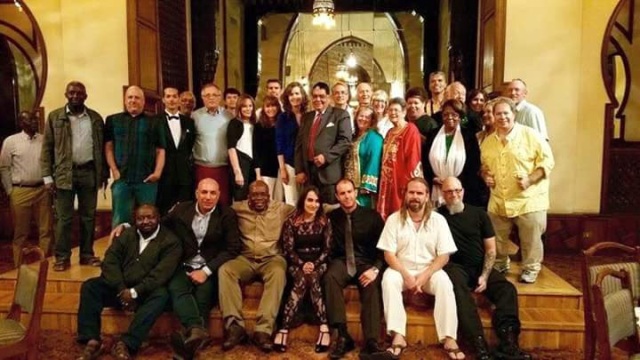 The following was written by Enneadic Star Pronaos Master Anajala about her recent trip to Egypt sponsored by and organized by the Grand Lodge.

As a member or non-member, the Rosicrucian tours offer insights into spiritual locations with practical lessons.  Inspired by our Grand Councilor who told my husband and me that if ever we could make the trip, the Rosicrucian tour of Egypt was astounding, and we should go, so, we listened to her.  My husband passed through transition before the next trip, but I went on the next tour.

Things you should know first:  The Rosicrucian Order has been leading member tours to Egypt since the 1930’s, and there are photos of members riding to the sites on camelback.   The Order sponsored Egyptian archeological digs and has established excellent relations with leading archeologists.  Because of this, our tour took us to a couple of sites that are off-limits to casual tourists.  And last but not least, the reason these sites are still standing is that, historically, Egypt got 1.5 inches of rain, A YEAR!  I share this with you because, while we were there, it rained for five days.  These magnificent monuments are slowly melting as the climate changes.  Go there sooner rather than later. 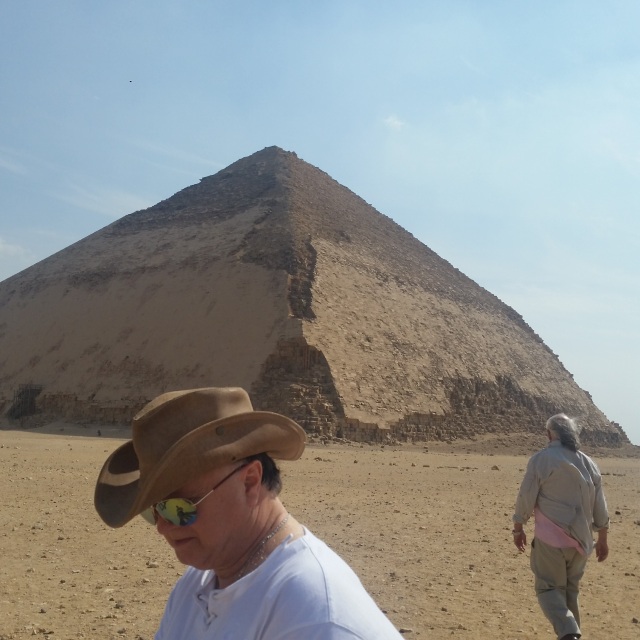 When we arrived at the Cairo airport, we were greeted by our tour host Hatem who called out “Welcome HOME!” His first lesson was that Egypt was where the Rosicrucians have the home of their heart.  (Hatem is second from the left, front row in top photo) Charter buses took us from site to site.  There was no riding camels until we came back to Cairo, and that was optional.  (On the bus ride to Abu Simbel I saw truckloads of camels being imported from Sudan.  Not native to Egypt, it turns out.)   In this photo, you can see the Imperator, the Grand Master Julie Scott, Administrator Karen Wark (who will lead us in the November Alchemy workshop) Rosicrucian Administrators and Fraters from Africa, and tour members from around the world.

Our tour was specially designed to take us from Cairo south, then we would turn around and go north up alongside and on the Nile, and we would visit temple after temple, learning the specific lesson of each temple, AS THE TEMPLE PRIEST INITIATION CANDIDATES DID in the past. We were suggested to study specific books before the trip, and these books provided deep insight when we walked in these ancient buildings and received initiations from these highest officers.  This was a Rosicrucian Initiatic Tour.

Some of the most gorgeous temples I found as moving as a mall store, and in some of the most ruined temples, I experienced amazing energies.  Standing between the paws of the Sphinx (a privilege I was told was rarely granted, and that we got because we were Rosicrucians) I felt the most amazing, thrilling energy!

We were challenged to face our fears. One Soror was claustrophobic, but walked, crawled and went deep into burial structures and temples.  I have a weak knee, and looking down into the inverted pyramid, (see photo, that was steep, see the woman on the right holding on to the wall for security on the way down) I was trying to beg off going down, but down I must go, and I did. 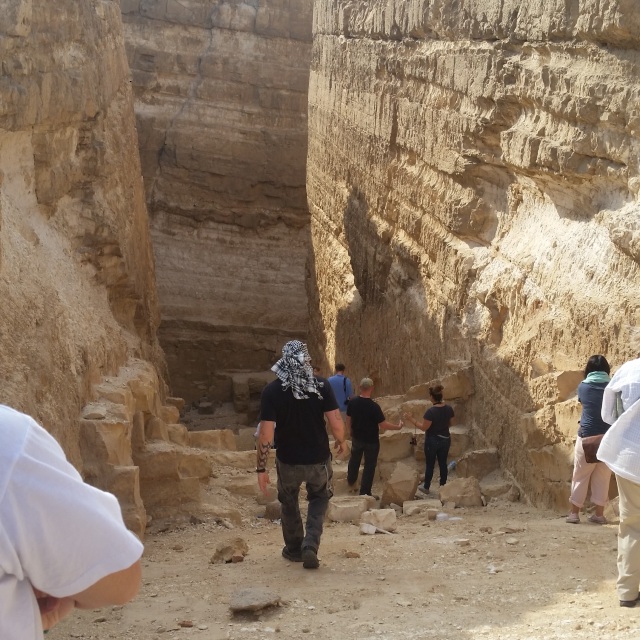 I faint in high heat and was told this trip in October will be cooler than usual (110 F average), and that it would be in the ’70s.  The first day after arrival, we were up at 4 am to go into the Temple of Ramses at Abu Simbel and see the sunlight shoot down the corridor and light the statue at the end.  At 4 am it was 90 degrees inside the temple, and  I Was Not At All Happy. By dawn, several people were getting woozy.  We poured from our water bottles over their heads.  I had brought with me half a dozen embroidered & sparkly hand fans, just in case, and they were eagerly bought off me by others on the tour.  Over the weeks of the trip, the temperatures gradually lowered into the 80’s, and I felt better.   When we got back to Cairo, we visited the Old Quarter, and I saw streets covered with fabric roofs.   (see photo) A very sensible adaptation to intense heat. 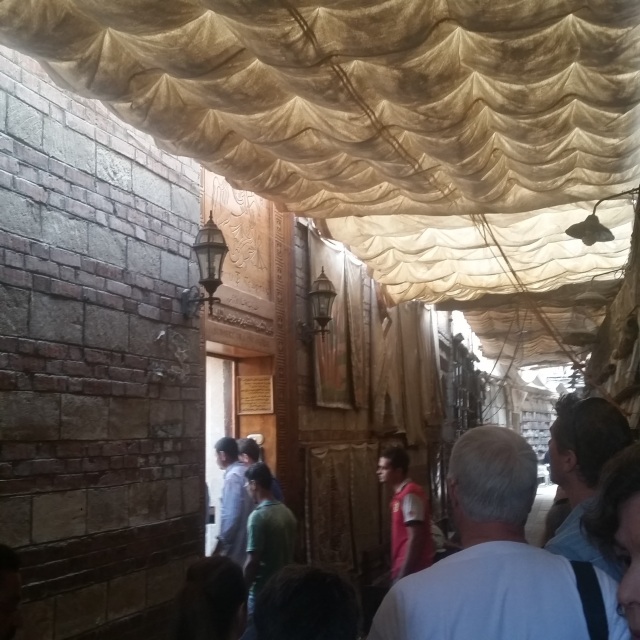 In the Old Quarter, the tour guides took us to a Mosque, a Synagogue, and a Church.  Good energies in all three places.  We went to a small town with an ancient church built on the ruins of a pre-Christian holy place.  That Church was the most excellent source of vibration lifting energy.  I sat in the pews and did not want to leave.  Couldn’t imagine why other people didn’t look ecstatic.  (Next post I’ll have photos from in there).  Another place I felt thrilling energy was in the temple dedicated to the Sun (RA).  There were alabaster disks set in a row, and if you stood or sat in the center, there was vortex-like energy.  (see photo). 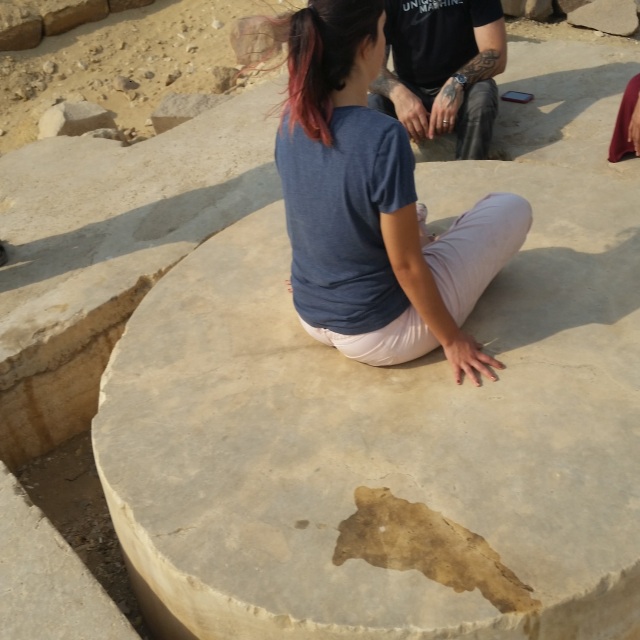 This tour was more than three weeks, and I have many photos, videos, and experiences to share with you.  And I repeat what the Grand Councilor told me, a Rosicrucian Tour of Egypt is astounding, and you should go if you get the chance!

This is the member blog for the Enneadic Star Pronaos. We’re the local Rosicrucian group for AMORC members in Oregon and SW Washington.  During the COVID-19 pandemic we are not meeting in person for rituals but are holding monthly online meetings.